What is laying capacity in chicken? #

Laying capacity is the maximum number of eggs a layer farmer should expect their hens to produce, within a certain time.

Laying capacity is a physical ceiling on your farm’s egg production. Hens cannot lay any more eggs than they are naturally capable of producing.

Actually, it takes 24-26 hours to form an unfertilized egg from scratch.

And they’re prolific – because only 30 minutes after laying an egg, hens begin forming a new egg.

According to Hyline (a global leader in poultry layer genetics), their Brown Commercial line hens lay 95% hen-day egg at peak.

Simply said, you can expect these Brown Commercial hens to lay an egg every single day 95% of the time,

Or, said slightly differently, with 95% confidence – that’s during their peak laying months.

This line of layer hens is well known for its high-level egg laying performance.

How To Optimize Your Hen’s Laying Capacity #

As we said, laying capacity is a physical ceiling on production.

A chicken (whatever the breed) simply cannot lay more eggs than it is physically able to produce.

The maximum here is 1 per day for a chicken.

Whilst this is the most, depending on breed, hens can lay anything up to this number.

The matter is of efficiency.

Each breed of chicken has its own physical performance profile.

Basically, a bunch of numbers that summarise the norm for what you should expect of the chicken.

They lay an egg a day 95% of the time at their physical peak: 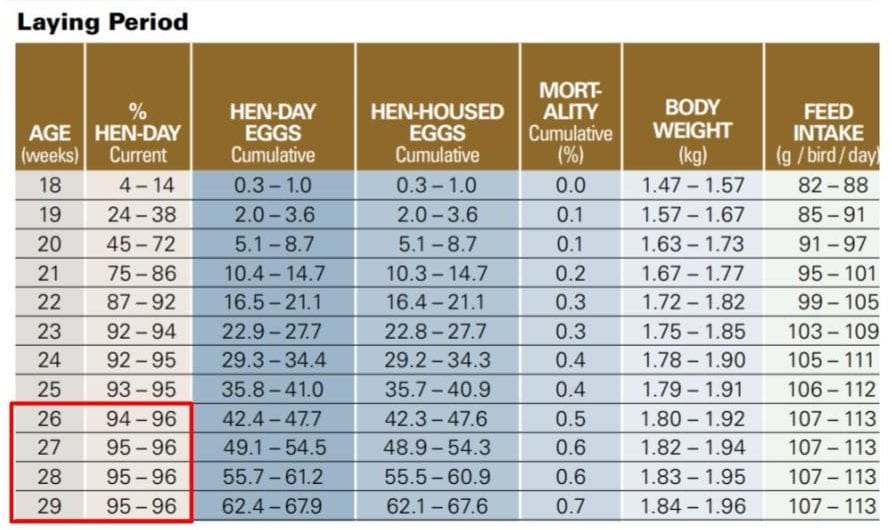 Which breed have you chosen and how does it measure up to standard?

Time Your Expectations With Their Age #

Egg-laying in hens is a function of their physical prime.

But just as you would expect, there are ages and seasons where their performance reaches peak.

This window of opportunity presents the highest egg output potential for your layer farm. 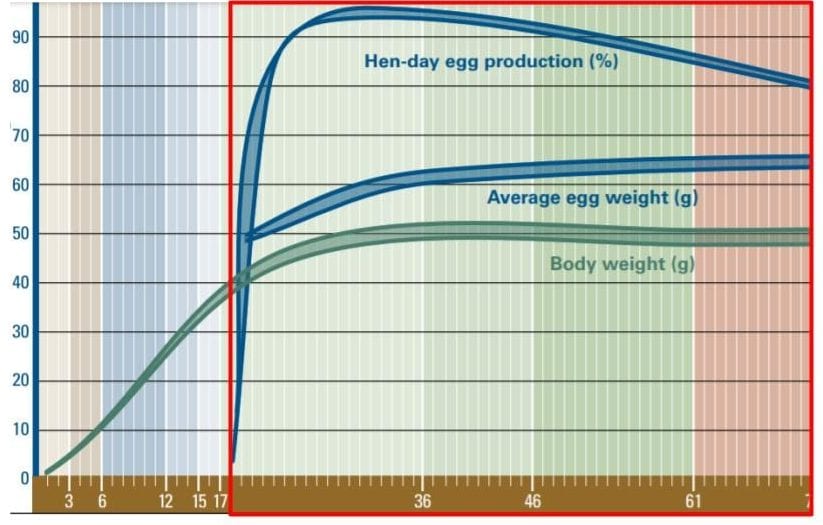 This particular breed of hens reaches its peak egg-laying ability at around week 29-30 of life (see the ‘r‘ shaped ribbon on the graph above).

(This is only after about 10 weeks from point-of-lay…a steep incline.)

This profile determines your business’s future:

How are you accounting for layer age in your production expectations?

Their bodies are systems that are specialised in this function.

…the performance of a layer hen’s body if entirely dependant upon its conditioning.

How well the hen’s body is poised and finely tuned dictates how many eggs it produces.

In the case of a car: mileage, oil levels, calibrated breaks etc. are all necessary for expected functioning.

As for layer hens, bodily development and being disease-free ensures optimal conditions for laying.

Chicken feed is THE raw material of your egg production business.

Just like a commercial factory manufacturing process, you just simply don’t get a product to appear at the end,

Unless you have the necessary materials supplied upstream.

But what is the optimal layer feed for getting the best egg-laying results?

The answer is in three parts…

And here they are:

This graph shows recommended feed products for layer birds from day old until the point of lay (PoL). 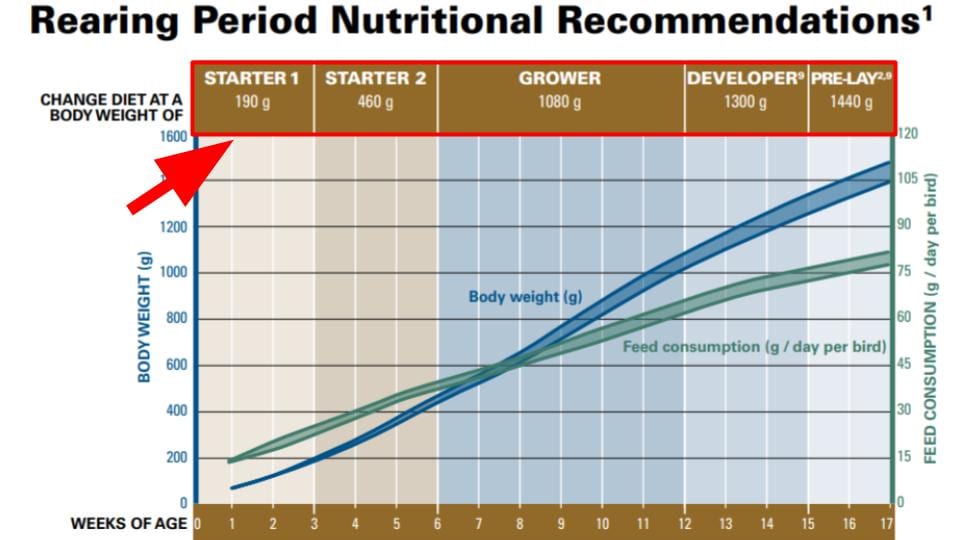 Within the first 17 months of life,

A layer hen would need to be passed through 5 different feed preparations (feed formulas) in order to reach PoL – point of lay – in optimal condition for laying.

…let’s take a look at how the composition of each feed preparation affects the feed uptake by the bird: 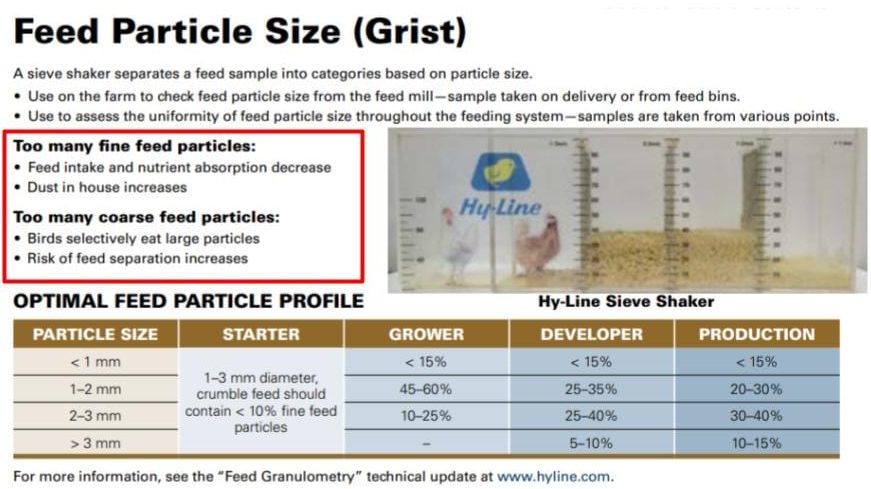 Too coarse a feed particle – and the feed mix will separate out and lead to hens selectively picking at food.

Birds here will suffer a loss of nutrition and respiratory (breathing) problems.

…a recent email from a reader provided some valuable insight into the negative impact of feed condition on bird health.

A new flock was purchased and not before too long he found widespread disease symptoms. 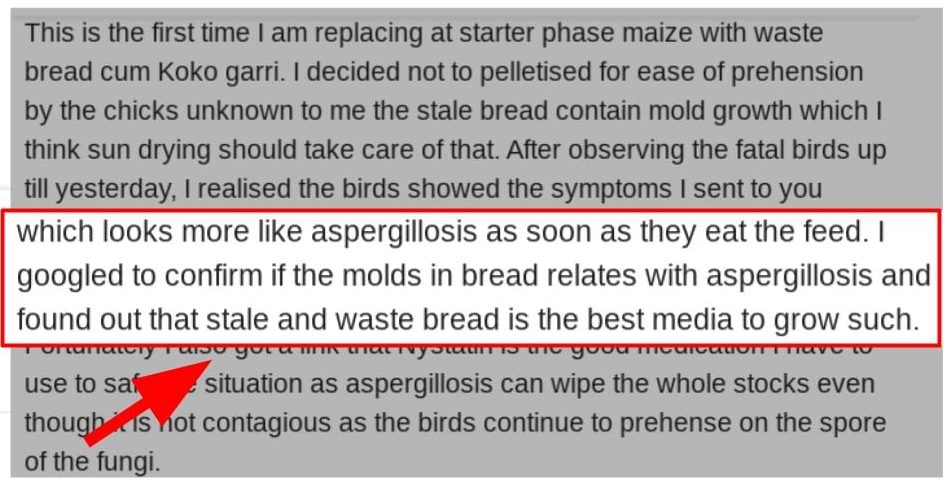 Which is why it’s critical to accept only the very best condition of feed ingredients (especially if you take the homemade feed route).

Your flock’s surroundings are natural helpers toward optimal egg production.

They provide your layer hens with just what they need to live comfortably and productively.

Lighting is one such factor.

The release of chemical messengers in layer hen’s bodies (stimulated by light) leads to an increase in egg prodcution. 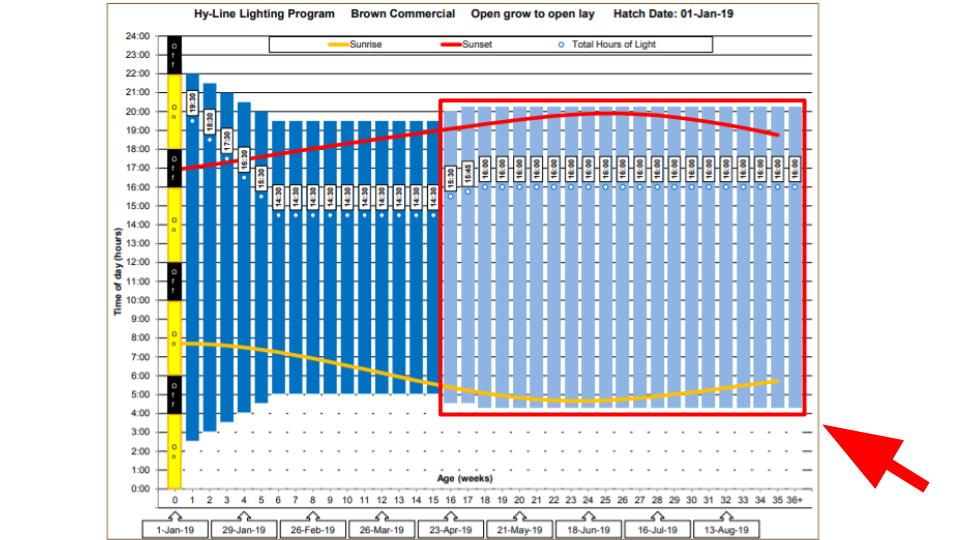 A chart like the one above plots artificial lighting needs against sunlight hours.

Depending on your climate and available sunlight hours,

You can literally develop an optimal program for putting on the lights for your layers.

In layer farming, some simple facts are just unavoidable. No matter how smart you get.

Every bird is different.

And yet every bird’s individual physical efforts counts towards your overall business performance.

A single egg can make all the difference.

But how do you know whether your flock is hitting their production target?

And how do you benchmark against the gold standard? 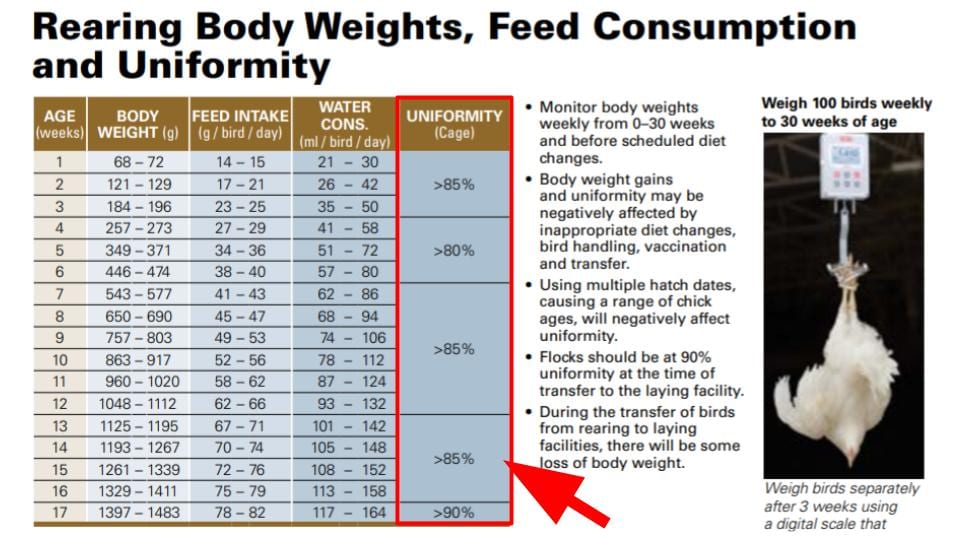 Flock uniformity is a measure of teamwork.

If you have any experience of either following or participating in competitive team sports,

You will know that the BEST performance occurs when the group behave like one man.

No separation, no clashes, no differences…

Having one ‘star performance’ among many mediocre is useless.

Because the overall result will likely result in a loss.

Star highlights in the midst of a hammering amount to vanity.

However, a uniform front and every man pulling in a tightly disciplined performance, time and time again…

Put it this way:

In a hundred days,

Factor in the same cost of rearing from feed expenses etc…

Multiply this by as many flocks as you intend to rear and you can snowball ROI.

But how exactly do you measure layer hen flock uniformity?

The key factors are:

Measure pullet weight regularly (from a random sample of birds) throughout the lead-up to ‘point of laying’ age.

Bird weight is a reliable development indicator for a hen’s future egg-laying capacity.

Keep Your Flock and Houses Biosecure #

A sick or harassed flock of layer hens will not thank your business with eggs.

Make sure your measures of biosecurity are watertight.

I share in one of my recent subscriber newsletters the ultimate gameplan for overcoming every poultry farm’s worse bio-enemy: 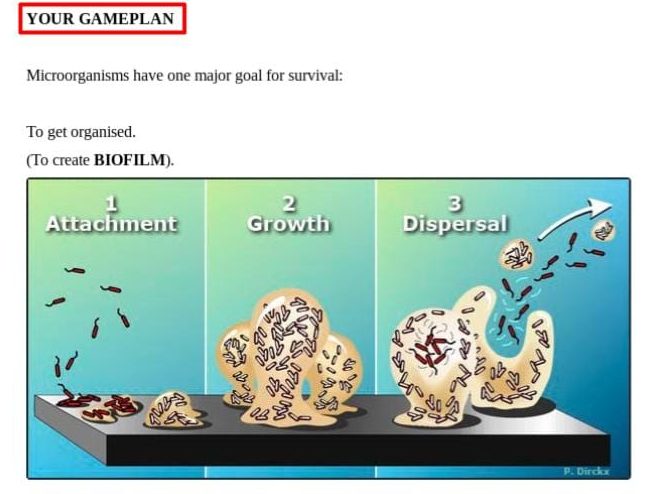 A valuable tutorial for staying in the clear of any bacterial threats to your layer farm profits.

On average an adult layer hen will go through a period called ‘moulting’.

This phase is characterised by feather loss and total loss of egg production for the time being.

Moulting in high-performance layers typically lasts for about 12 weeks.

After that, they bounce back rapidly into the swing of full flow egg laying again.

How do you smooth out the downturn in egg-laying due to moulting?

Which brings us onto…

Calculating Laying Capacity for Your Farm #

PRO TIP: Use The Most Profitable Production System #

Understanding egg-laying patterns in a single hen is one thing,

But having a clear vision of production patterns in a multi-flock production system is quite something else.

The overlap can be incredibly complex.

Because of the variables relating to egg production.

The timings and scheduling could match major transport service timetabling for difficulty.

(Ever thought what it would be like to manage the daily incoming and outgoings of an international airport runway?)

And within all of this – you’ve still got the matter of maintaining enough visibility to predict your ROI against committed funds.

Nerve-wracking to say the least,

…but help’s at hand.

My aim was simple.

To answer the following question:

So, I got to number crunching.

What did I find?

ALL KINDS OF PATTERNS EMERGED.

Take this, for example, 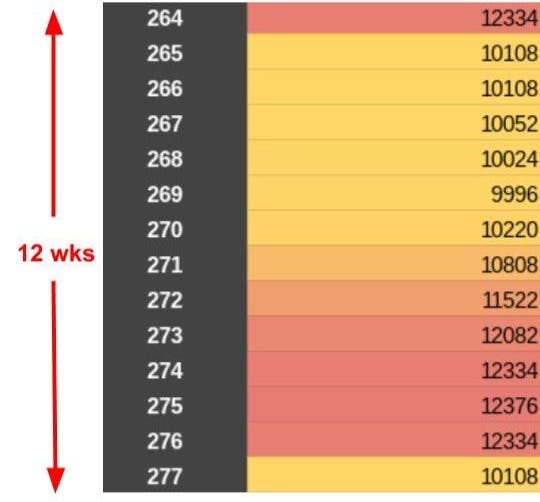 Here’s one statistic that’s worth taking away with you:

What does this mean practically?

You can expect with 1+1+5 layer farming systems that at optimal production levels,

Your volume of eggs produced should never dip below 20% of peak output.

And so, your sales income, profit and resulting business earnings fit within a much tighter band of variation.

So what happens to your overall farm production when you cull a ‘formerly profitable’ flock?

How does the transition of bringing in a replacement flock affect your numbers (eggs and profit)?

This just so happens to be the period when an exiting layer flock is culled and a PoL flock takes their place. 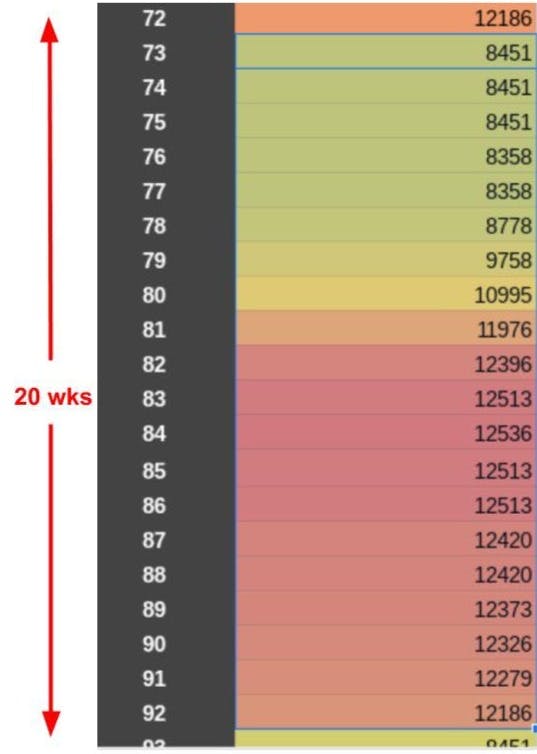 The colourful right-hand side column is actual eggs produced and the black left-hand column of numbers is the week number.

Notice week 72 and week 92 having identical numbers of eggs?

This is the final production output of a cycle.

…the total number of egg produced on-farm drops to 8,451 eggs per week at the adoption of a new PoL flock…

…and then the egg-laying capacity builds up again.

(Just the detail you need for razor-sharp feasibility planning.)

So that’s it for laying capacity.

Now I want to hear about your experience with planning how many eggs to expect from layer hen flocks.

How accurate have your attempts been?

What could you have done better?

Still stuck? How can we help?

How can we help?