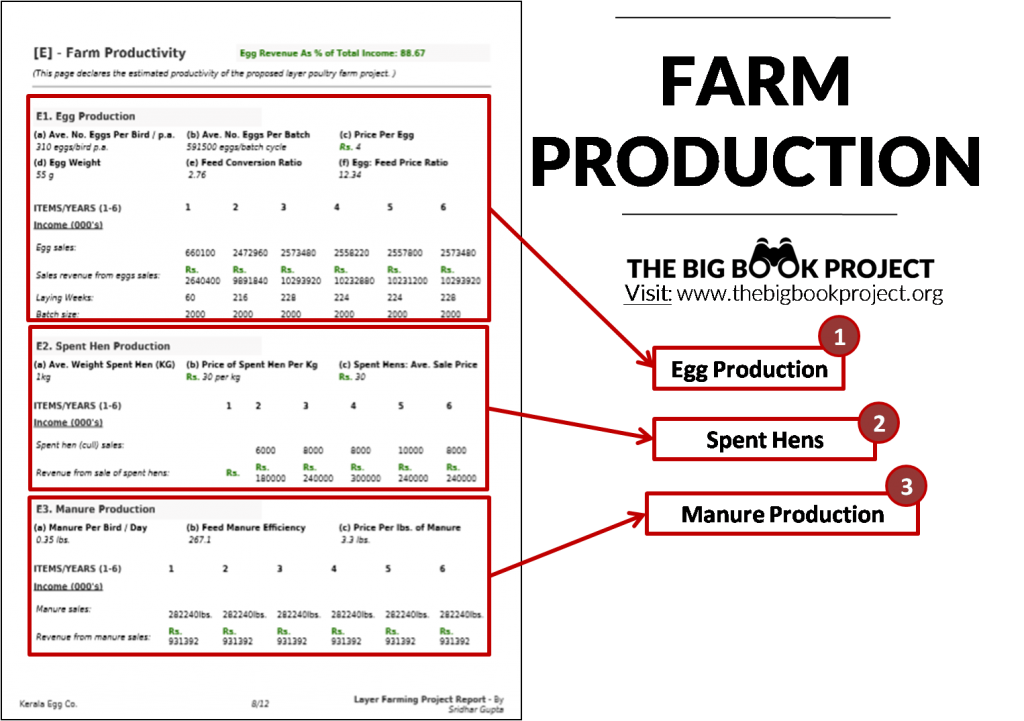 How is farm production quoted within a poultry farming project plan?

Primarily, the type of poultry farm will dictate the products it generates.

This will be distinct one from another – and therefore your project plan will need to signify this.

Layer (egg) poultry farming projects will output the following products, in the order of priority given:

Broiler farming projects will have the following output profile:

That said, let’s take a deep dive into our running example of this layer farm & it’s production…

The rate of egg production on a poultry farm is dependant upon many variables, which experienced farm hands will be most aware of.

However, within the context of your project report, you will want to set some firm expectations, on the assumption of course, that your exercising of animal husbandry will yield optimal results.

On what do your base your expected productivity figures?

We need some universal benchmarks.

We aligned the adopted operational set-up and practices of this proposed poultry farming project with International FAO guidelines.

On this basis, we deem it also feasible to quote the FAO expected farm production levels in association with this project.

…plus, some researched figures:

Now it's just a case of multiplication:

If you multiply the number of eggs by your expected price of sale...in this case it was 4 rupees (but remember this could easily be 'X' Naira etc)...

The question remains however, how many eggs is your poultry farming project likely to produce year to year? (taking into account the following production variables):

You need some hard graft at your desk to produce a commercial egg production model, which is also consistent with international best practice guidelines…

Yet flexible enough to help you do some accurate scenario planning.

Want a commercial egg production model for your poultry project?

Let's take a look at the income generated from this example layer farming project...

When we scan over the 6 years worth of projected production and sales, we find a major discrepancy in year 1.

This figure is about one quarter the level of subsequent years.

Remembering to achieve the most profitable & consistent results, we choose not to buy hens at point of lay i.e. mature... but rather at 1 day old.

At the beginning of the project, you start with your first batch of chicks.

Your farm therefore begins at zero-production.

It takes approximately 20 weeks to get your batch to mature egg laying age.

During this stage you have no egg production.

Production is offset until your 1st batch gets to maturity.

After that, you have approximately 52 weeks of egg production from that batch.

Meanwhile, 12 weeks after the purchase of your 1st batch, you buy another one (according to the 1+1+5 rearing system).

Again, this 2nd batch is bought at 1 day old and egg laying is therefore offset with this batch also for 20 weeks.

Using this 1+1+5 system... each batch of birds, of egg producing age, during any given week within your farm production schedule contributes to the number of 'laying weeks' of the farm.

What are laying weeks?

'Laying weeks per annum' is the number of active egg laying periods or scheduled slots which batches within your farm contribute to egg productivity.

With staggered acquisition and sale of bird batches, planning a model of egg production for a commercial layer farm produces a kind of waterfall effect chart...

With 3 out of 5 batches offering optimal laying rates & 2 out of five offering less than optimal egg laying rates because they are either newly purchased and still immature.

Or batches which are about to reach the end of their commercial laying cycle of 72 weeks and are about to be sold, as 'spent hens'.

Because of this continual process of decommissioning and replenishment of layer batches in order to maintain optimal rates of egg output, the available 'laying weeks' of your poultry farm will be in flux year to year.

Hence why you don't get identical production figures, nor sales figures...year on year.

The same is also true of alternative egg laying rearing models like: 1+2, 1+3 (the most commonly quoted).

The only consistent figure quoted is the batch size which in the case of this example is 2,000 birds.

Whatever your chosen batch size, the number of birds in a batch should remain consistent in order to achieve consistent production levels as a farm.

The practical importance of these numbers is relatively unimportant to practical farm planning, but suffice as economic markers related to cost efficiency.

More on these in another article.